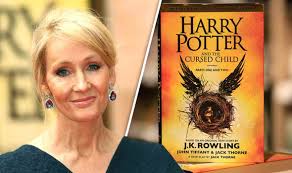 It has been nine years since the movie Harry Potter and the Deathly Hallows was released, nine years since the last installment of the Harry Potter book series, and nine years of fans hoping for another book. Well, the fans have finally gotten what they wanted. On July 31, 2016, which is both J.K. Rowling’s and Harry Potter’s birthday, Harry Potter and the Cursed Child was released. Written as a play by Jack Thorne and directed by John Tiffany to be performed in London’s West End at the Palace Theater, it was originally authored by J.K. Rowling. Due to the fact it was written to be a play, the book is in script format, and this is an entirely new technique for a Harry Potter book.

The book starts off where Harry Potter and the Deathly Hallows left off. The last chapter of the seventh book was a chapter titled “19 Years Later.”  Therefore, the story begins 19 years after the Battle of Hogwarts. Harry and Ginny are married, and so are Ron and Hermione. They’re sending their children off to their first year at Hogwarts, through platform 9 ¾. This is where the new novel begins. The story is mostly focused on Harry’s son Albus, and Draco’s son Scorpius, who become best friends. They steal the last time turner in order to go back in time to save Cedric Diggory during the Triwizard Tournament. The book also focuses on the fragile relationship between Harry and Albus, father and son, since both could be labeled as the “cursed child”–hence the title.  Harry lost both his parents at a young age to Lord Voldemort and will forever be known as the boy who lived and the chosen one. Albus, however, feels like he has to live up to his father’s accomplishments. It’s not easy having a dad who saved the wizarding world.

Rowling’s style is somewhat compromised by the play format, and this is the only drawback.  Her descriptive passages are one of the most remarkable aspects of her books, and this is reduced somewhat in order to work as a play fitting into a three-hour format. Junior Sawyer Stubrich commented that he “really likes the play format, but was somewhat disappointed by the shorter length.” Potter fans, after all, are used to reading 400-900 page novels.

However, this book certainly gave Potter fans what they’ve  been waiting for. They have been given a look into the lives of the next generation blossoming since the Battle of Hogwarts. Harry Potter and the Cursed Child has definitely lived up to my expectations. Has it lived up to yours? Or were you disappointed?