Death of Common Sense: The Great Wall of America 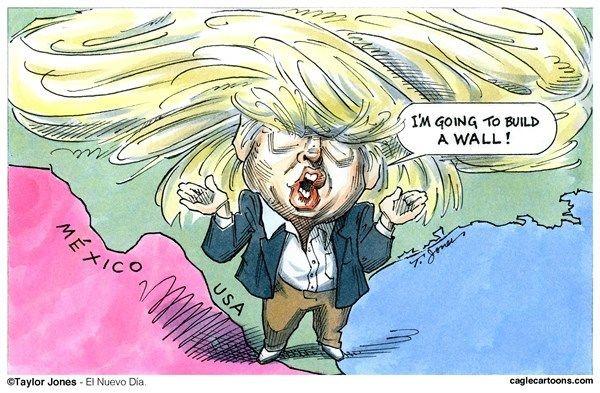 Of the small army of Republican candidates who are partaking in the 2016 Presidential race, frontrunner and troll doll look alike Donald Trump has received by far the most media attention. He has gotten this ludicrous amount of attention because of his controversial “policies” on immigration. I emphasize that it is not a policy, which is defined as a course or principle of action adopted or proposed by a government, party, business, or individual; but is instead a “policy”, which can only be defined as an idea or action so incredibly stupid that it makes babies cry and our forefathers cringe in disgust. “Why is his policy so awful?!” you may be asking me, and if you haven’t been living under a rock or recently returned from the dead, you already know why. A reasonable course of action would be to increase the manpower on the border to reinforce it, thus providing Americans with more jobs, but there has been such a lack of common sense in this race that Thomas Paine is tossing and turning in his grave. Instead of doing something sensible, Mr. Trump has thought of the purely genius idea of building a massive wall!

Yes, you did read that right. He wants to build a wall stretching all the way across the border of Mexico in order to completely stop illegal immigration. I would like to formally remind anyone reading this that we aren’t Cold War Berlin; we aren’t fending off Scottish Woad raiders; and we aren’t keeping the Mongol Horde out of China. Since none of these invasions are relevant to the United States, I feel that a wall is pointless, expensive, and extreme. Speaking of expensive, you better open up your checkbooks because Uncle Sam’s about to ask for a 5-7 billion dollar loan in order to complete the perfect representation of Trump’s massive ego. Oh, but you don’t have to worry because the king of the comb over has an idea to deal with that pesky little 10 digit cost. He will just FORCE the Mexican government to pay for the whole thing from start to finish! I’m sure that the Mexican government will gladly put forth their time, money and cooperation to complete the new democracy-crushing, 12 foot high dystopian structure. Seriously?

Not to mention how Trump promises to deport massive amounts of working illegal immigrants in the south back to Mexico. If getting rid of 8% of the workforce is a good move for the nation, I guess that Richard Nixon was the best president in our history and Shaquille O’Neil had a successful acting career. Last time I checked, America was “Home of the Free!” not the “Home of the Free?” I am not a Democrat or Republican, but instead am only on the side of common sense, and seeing a plan like this gives me a border-sized headache. Then it turns into a full blown aneurism when I realized that this man is still leading the polls across the nation. Oh America, you really are the greatest nation on earth, but even the greatest have a fall from grace sometimes. With some hope and a pinch of intelligent thinking, hopefully Americans will catch on to how mind-bogglingly idiotic this plan is and reconsider who the nation’s next leader should be.