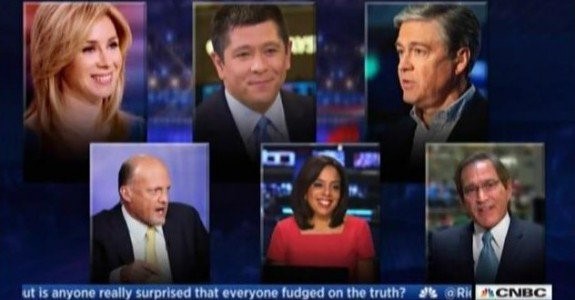 On October 28, the third presidential GOP debate was held and hosted by CNBC. Three moderators were chosen to run the affair, their names being Carl Quintanilla, John Harwood, and Becky Quick. Their jobs as moderators typically consist of three aspects. These tasks are to ask the politically pressing questions to candidates on stage, enforce all rules (including rebuttals), and call out commercial breaks. Now allow me to list the things they actually did during this debate instead of enforcing the three basic rules. 1) They asked questions that were incredibly irrelevant or downright stupid; 2) I will be polite in saying that they “helped” to guide candidates to answers that the moderators wanted with their questions; however, 3) they didn’t enforce any debate laws, including the use of the rebuttal timer; and finally, 4) were too busy arguing amongst themselves to cut to a commercial.

Now I would like to go into more detail in order to strengthen these points. Let’s start with these questions, or as I like to call them, name calling or ad hominem irrelevancies. Only around 30% of the questions in the first 20 minutes of the debate were relevant to issues that the American nation is currently faced with, whilst the other 70% were gems like: “Is this comic book election?” Or “Marco Rubio, why don’t you resign?” Why would you want to hear about crucial American issues in a debate when you can watch moderators ask Ben Carson if he is good at math instead……right? These gut wrenchingly awful questions left me only wondering one thing after this debate was finished; what IQ does it take for the human mind to construct questions of this disgustingly moronic nature? I think it could be somewhere between 60-70, but I’m sure the moderators would have answered that for me.

Speaking of Tweedle-Dee, Tweedle-Dumb, and Tweedle-Dumber, I would like to comment on their “sins of the night.” John Harwood must have been having a bad day on October 28, because general human decency went directly out the window as he screamed and shouted at every candidate who called him out for the stupendously bad questions he was asking. Marco Rubio, Donald Trump, and Ted Cruz were all subject to the wrath of John the destroyer. Carl Quintanilla thought he was by far the most important person on that stage and wore his Napoleon complex like a badge. Someone should notify Mr. Quintanilla that being an anchor on “Squawk on the Street” doesn’t make one important enough to brush aside a dozen hopefuls to who may become the next President of the United States Becky Quick was the most professional of the bunch by a long shot, but had to struggle with untruths in the questions she used with Donald Trump. On a related note, if I had one dollar for every time Becky apologized to Trump for this misinformation, I could afford a four year education at Harvard.

Now, I’m no expert on what makes a good moderator, but I would think that babbling and arguing with fellow moderators on stage during the event probably isn’t a highly praised trait. Larry, Curly, and female Mo, during multiple occasions, turned their attention from screaming at the candidates to screaming at one another like the debate was some kind of political mosh pit. This entire event was truly appalling and detestable, but I have to admit it could have been worse. The death of common sense in this debate was a comical and entertaining one. It was like watching three little kids who wanted to put on suits and pretend they were adults. This debate was adorably stupid, but it was still horrendous in the end, so CNBC and their moderators deserve all the criticism they have received.