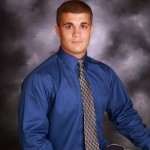 Most awards are given to students who have been on the Honor Roll, or to players who have thrown the most passes.  However, the Gervelis Law Firm and WFMJ have brought together intellect, athleticism, and inspiration in the Gervelis Inspiration Award.  Hubbard High School’s very own Anthony Pesce was awarded the scholarship after Hubbard’s head football coach nominated him, and other students voted for him on the WFMJ website. The goal of the scholarship was to find local students who inspire others both on and off the field.  Anthony seemed excited to win the $1,000.00 award, humbly stating: “It’s an honor to see how my peers and coaches look at me as an inspiration.”

Anthony is the son of Tony and Lisa Pesce. He has three siblings:  Gianna, Sal and Santino.  Although he is only 17, Anthony is no stranger to nominations.  He is a member of National Honor Society, the President of the Ecology Club, and he was voted “Funniest in the Class of 2012.” He is also a member of the St. Patrick’s Church and their Youth Renewal Program.  With all of these honors and involvements, Anthony’s humility remains a mystery.  When asked if he displayed any interesting or unique qualities, Anthony appeared to be at a loss for words.  He did finally admit that he plays guitar rather well.  However, with all of his accomplishments–whether acknowledged or not–he is incredibly modest, and perhaps that’s the most impressive aspect of all about Anthony Pesce.

Although his choice of college is undecided, Anthony plans on going to a D1 or D2 school to play football.  He would like to major in Chemistry or Forensic Science.  In any case, no matter what he does later on lin life, Anthony will always serve as an inspiration to his peer and teammates alike.