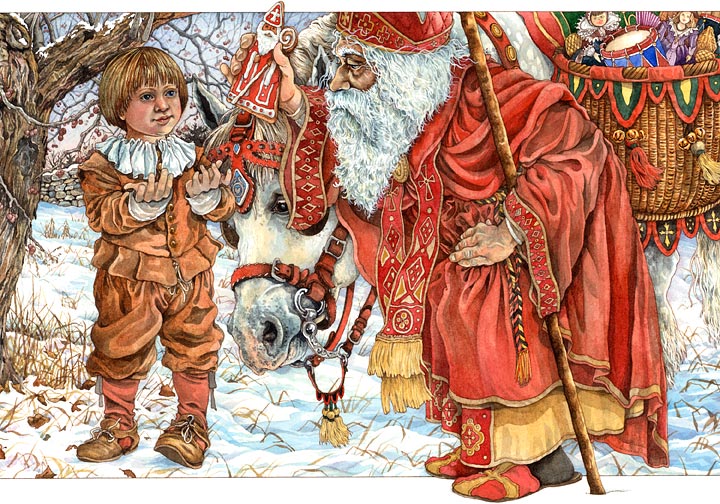 As most of us know, Santa Claus is jolly man traveling in a sleigh once a year on Christmas Eve delivering all the good children gifts and toys.  We also know that he lives at the North Pole along with the elves who help make the toys.  Although this is the most popular version of the story of Santa Claus, there is a history to the tale, and most of us don’t know it.  When asked about his knowledge of the jolly guy’s origins, sophomore Tony Dattilo remarked,  “He was a guy named St. Nick who gave orphans presents and spread it.”  Freshman Emma Wylie was unsure of the birthplace of the myth. “Didn’t it originate in Turkey?” She offered.

Although not one historical reference is 100% absolute, most researchers believe that the story of Santa Claus, or Kris Kringle, as some name him,  originated in the fourth century, in Turkey,  with a very rich monk named Nicholas who helped people in need by giving secret gifts purchased through his family inheritance.  According to information on history.com, the legend tells of a poor man who three daughters, but didn’t have enough money to get them married.  The wealthy monk heard of this local situation, so in the middle of the night, Nicholas dropped a bag of gold down their chimney to remain anonymous and to assist the man in paying for his daughter’s marriage.  The bag of gold dropped into a stocking which was being hung to dry.  Nicholas repeated the same process for the second daughter to get married.  The poor man determined to learn who was leaving the gifts, so he hid every night until he finally caught the generous monk.  Nicholas begged the old man not to tell anyone, but when the word of poor people receiving secret gifts spread, Nicholas was recognized.  “Nicholas’s popularity spread and he became known as the protector of children and sailors. His feast day is celebrated on the anniversary of his death, December 6. This was traditionally considered a lucky day to make large purchases or to get married.”  Nicholas was labeled as a saint long before canonization became an accepted practice in the Catholic church.

According to this legend, the story became Americanized by the famous Dutch author, Washington Irving, who named him “Sinter Klaas”, which is Dutch for Saint Nicholas.  So this name, eventually evolving to  Santa Claus, became popularized around the same time that Irving authored “The Legend of Sleepy Hollow” and “Rip Van Winkle.” Irving depicted him as joyous, red-cheeked, white-bearded, rotund and a bit mischievous.  It seems that this image has stuck.  So we learn that even Santa Claus has a hidden past, which kind of makes him all the more appealing.