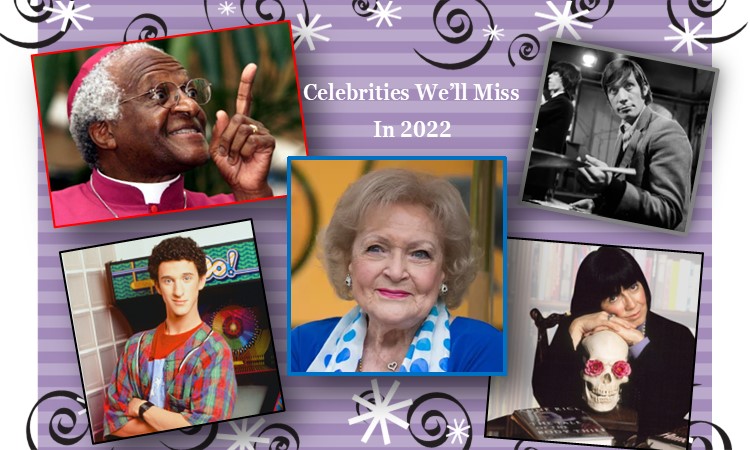 2021 was the year that we thought would bring life back to “normal” after the rise of the Coronavirus pandemic, but developments didn’t go as all had once hoped. Life did not, in fact, return to what it used to be. As a matter of fact, things increasingly got worse–health-wise, economically, politically and socially. Additionally celebrities, performers and important activists, the people who contributed to a sense of normalcy and comfort from the past decades, were also taken from us. This loss deeply affected many. As stated by famous author Chuck Palahniuk, who penned Survivor and The Fight Club: “We all die. The goal isn’t to live forever, the goal is to create something that will.” Many of these public figures who passed in 2021 did just that.  They  left an impact on our world today. These famous people gave everyone some form of distraction from the pandemic; they gave many sense of contentment, humor, understanding and peace, even if it was for a short amount of time. That was the most valuable part of their legacy. So here’s a short tribute to those whom we’ll miss deeply in 2022.

Betty White (1922-2021):  Betty White was a Hollywood icon who had a lasting impact on the hearts of millions. White was a well known actress and comedian who worked both in front of and behind the camera. Her most famous role was that of Rose Nylund in the hit 80’s sitcom The Golden Girls. However, even before the rise of  The Golden Girls, Betty was known for many other roles in the entertainment industry. One of her more popular roles was Sue Ann Nivens in  The Mary Tyler Moore Show . “I enjoyed watching her in The Golden Girls and seeing her cameos in many movies. She always seemed like a kind person that could light up a room,” remarked Mia King, a freshman at Hubbard High School. Betty Whites death affected many people, including many of her adoring fans at Hubbard High School she will be sadly missed.  For some of Betty White’s Top Moments, enjoy this YouTube video: https://youtu.be/_o83aMEBFQs

Anne Rice (1941-2021):  Anne Rice was an American author who was most known for her works of gothic fiction; she popularized vampires in a series of novels, so much so that people couldn’t get enough of them–in books, movies, and TV series. One of her most  famous works was her debut novel titled Interview with A Vampire, which became a famous film starring Brad Pitt and Tom Cruise.  Additionally, Rice also published a total of 36 novels covering many genres, primarily horror. Rice was nicknamed The Vampire Queen.  In an article by the “CBC”, a journalist wrote: “Anne Rice used vampires, witches and werewolves to explore “great cosmic spiritual connections” about identity and belonging.” Rice’s creativity and enjoyable writing will be sorely missed by her avid readers. Click here to enjoy the trailer of Interview with a Vampire: https://www.youtube.com/watch?v=sCmYN6TLd8A

Charlie Watts (1941-2021): Charlie Watts, an European musician and the drummer of the well-known band The Rolling Stones, died in August of 2021 at the age of 80. Caroline Capuzello a sophomore at HHS says “Although underrated, Charlie was magic on the drums and definitely didn’t get enough credit for his contributions to some of the Rolling Stones best songs.” In case one doesn’t know, the Rolling Stones are a British rock group that originally began performing in 1962.  They drew on Chicago blues music to create a very creative version of the dark side of post-1960s counterculture. The original members were Mick Jagger, Keith Richards, Brian Jones, Bill Wyman, and Charlie Watts.  The Stones have been performing for 60 years!  Some other music groups that Watts was a part of include: Rocket 88, The ABC&D Of Boogie Woogie and Alexis Korner’s Blues Incorporated. Charlie Watts was very influential with his contributions to the music industry and his legacy will be remembered.

Desmond Tutu (1931-2021):  Desmond Tutu, world renowned theologian and winner of the Nobel Peace prize in 1984, died in December of 2021 at the age of 90. Tutu was an angelicin South African bishop, who focused mainly on human rights. According to an online encyclopedia: “In 1995 he was named head of the Truth and Reconciliation Commission.” This group mostly dealt with human rights violations at the end of apartheid (Apartheid- a system of segregation based on race). Desmond Tutu had a very large impact on the growth of the human rights movement, particularly in South Africa, emphasizing non-violent protest and economic pressures to accomplish change.  His leadership and courage will be missed.

Dustin Diamond (1977-2021): Dustin Diamond, more famously known as Screech from the hit 90s sitcom Saved By the Bell, died in February of 2021 at the age of 44 after being diagnosed with stage four lung cancer. This comedic character that Dustin played was loved by many for his humor and wit and his altogether his goofy personality. He played this character on the popular sitcom for 13 years. Some other occupations of Diamond’s included director, comedian, musician and sometimes he performed as a professional wrestler. Though his character was beloved, his off screen life was very controversial. He, like so many other childhood actors, had a difficult time adjusting to adult life after the roles stopped coming in. Though he might not be here, his silly, good-natured character will live on in the hearts of many.

After looking back at these famous individuals we are reminded that we are not promised forever, death is something that we will never escape. Whether it be someone famous we have lost or a close family member, let us not forget to hang onto the legacy they have left behind. Let us also strive, as they did, to create something for the world that will last generations, and make an impact on how others recognize and enjoy life.