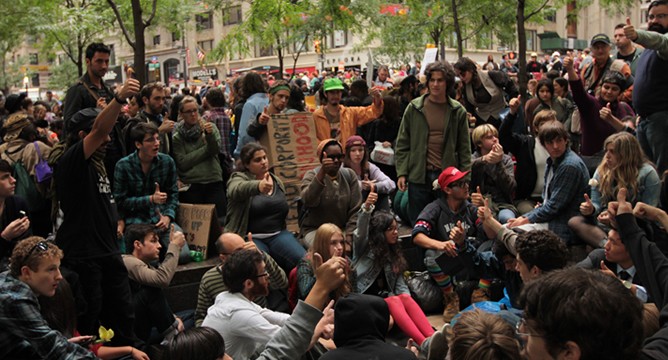 Talk of it is everywhere: on the streets, on televised news, online through networking sites, and  in the paper… but what exactly is this “Occupy Wall Street” that everyone keeps referencing? According to www.occupywallst.org, Occupy Wall Street is “a people-powered movement that began on September 17, 2011 in Liberty Square in Manhattan’s Financial District and has spread to over 1,500 cities all over the world.”   With the twitter hast-tag “#ows”, those in the movement are fighting civilly against the major banks and corporations whom, they believe, are in the way of the democratic process.

Of course, as with any movement come those radical participants, and many critics think that “Occupy” has become a gathering place for the unemployed, criminal element in cities.  In some locations, suicides have occurred as well as theft, pollution and litter.  But most protesters consider themselves to be peaceful.   They are fighting the role of Wall Street, whom they believe is the catalyst behind the financial collapse initiated while Bush was still in office, and escalated when President Obama became Commander-in-Chief.   Those protesting call themselves the “99%”, and they are fighting the richest “1%” of people who “are writing the rules of an unfair global economy that is foreclosing on our future” (Olberman qtd. in “About Us: Occupy…” ).

On the Occupy Wall Street website, there is more information on the grassroots movement and how one can get involved.  Additionally, check out other websites like CNN.com, or even the website for The New York Times. For more information on the Occupy Wall Street movement here in Youngstown, check out websites for local news stations such as wkbn.com or wfmj.com.  Do some research and make an informed decision on this controversial movement.