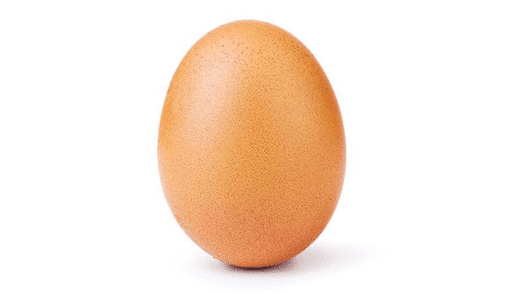 The longest, timed breath held voluntarily, the tallest man living, and the most pi places memorized: these three are considered to be some pretty normal-sounding world records. However, you may have recently heard about a world record for an… egg?  Yes, that’s right: an egg!

The story of this world record begins with a famous celebrity named Kylie Jenner. Two seemingly unrelated topics actually have something in common–holding, or once holding, the world record for the most-liked picture on Instagram. On January 4th, 2019, an Instagram account named “world_record_egg” posted a photo of a brown egg (shown above) with the caption: “Let’s set a world record together and get the most liked post on Instagram. Beating the current world record held by Kylie Jenner (18 million)! We got this.” Instagrammers loved this idea, and the account quickly procured 2.8 million followers. As of right now, this photogenic egg holds over 52 million likes! The account is verified and boasts a small check mark next to its username.

After the famous world record post, the account proceeded to post three more pictures- two on January 18th and one on January 29th. The three pictures show an increasing crack in the egg’s shell. Then, on February 1st, the account made a post of the semi-cracked egg with football laces on it. The caption said, “The wait is over. All will be revealed this Sunday following the Super Bowl. Watch it first, only on @hulu. #EggGang #WeGotThis #TalkingEgg” This post truly confused many, but with the Super Bowl now over, the account made its most recent post. This time, it is a video. It starts out with the egg, which now features animated eyes, and words that appear on the screen stating, “Hi. I’m the world_record_egg (you may have heard of me). Recently I’ve started to crack.” The video then shows the egg crack completely. The video captions continue, with the egg saying: “The pressure of social media is getting to me. If you’re struggling too, talk to someone.” Next, the cracked egg reverses back into its original, uncracked self, finally stating: “We got this.” The egg disappears off the screen and a message appears, saying, “For more info visit: talkingegg.info #talkingegg egg gang.” The caption for the video states, “Phew! I feel so much better now. If you’re feeling the pressure, visit talkingegg.info to find out more. Let’s build this list together. #EggGang #WeGotThis #TalkingEgg” This ad directs the followers to a website that includes many links to organizations, all containing contact information for people who are possibly struggling with a mental illness.  So at its heart, this egg is more than just a celebrity; it’s a do-gooder with an important message.

Students at Hubbard High School heard about this world record egg and decided to weigh in with their opinions. Junior Sogol Nasseri, who liked the post, said, “In my opinion, the world record egg is funny and I think it’s cool that so many people came together to help break a record.” Junior Grace Ryser also liked the post, remarking, “I think the world record egg post is funny, and I find it ridiculous, yet humorous, that 52 million people took time out of their day to go like the picture.” Lastly, Junior Matt Raseta disagrees with the previous opinions, as he states, “I think the post is funny, but I also think it’s kind of pathetic that it was actually a trend, and we wasted our time on something as foolish as that.”

So far, in 2019, we have learned from this world record egg that not all social media posts are bad. Not only did millions of people come together to accomplish a goal, but the account is also using their platform to promote seeking help for mental health issues. Although it was a silly post that started off as a joke, it has now turned into much, much more. Hopefully in the future, more social media accounts will use their fame to spread positive messages, which is “egg”actly what has happened in this case.