Social Media Censorship is a heated subject that has become commonly debated between media platforms and their users. Networks such as Facebook, Instagram and Twitter have been facing many accusations for misuse of censorship. Although most censorable subjects are protected by the First Amendment, social media platforms do have an obligation to remove lies and clear propaganda so the public remains honestly informed. On the other hand, censorship gives one group authority over another; often times this group is a political party within the government. So where should the line be drawn?

The main topics that the nation should be concerned with censoring are hate speech, obscenity, misinformation, and harassment. Consider that the internet gives just about anyone access to any knowledge or contacts to anyone or everyone. Having too much accessibility can cause negative feedback and further result in a lack of safety, rioting, and unlawfulness. Censorship relating to topics such as: violent acts, speech, or posts; pornography or any form of nudity; media that incudes hatred or discrimination against any one group; or classified documents are all examples where censoring or taking material down is necessary. Discrimination and any hate speech being promoted on the internet clearly has many reasons as to why it should be censored or removed. Content like this is only furthering the disunity and division between people. In this case, the prevention of all of this could at least be aided by each platform censoring this material. Considering the majority of social media users are under 29, violent or pornographic content could be extremely harmful, states an online source.  If a platform is going to be open to any age, then everything on the platform should be appropriate for all ages.

Websites and apps with age restrictions and background checks have the ability to post obscene content and regulate that content. The same situation goes for violent content. This seems like a safer option than leaving allowing access to everyone. Hubbard High School Senior, Mikey Scoville states, “I think censorship in social media is a good thing. I think it’s okay to monitor what is posted on certain platforms. A lot of things posted on social media aren’t always appropriate, especially for a younger audience. However, I do think they take censorship too far and remove things that aren’t harmful or have a negative influence on people.”

Misinformation can definitely have a negative effect.  However, the regulation of this would be extremely difficult because the fact checking and actual investigating could be inaccurate or may not be handled in a timely manner. Hubbard High School Junior, Richie Sandburg says, “Censorship is flawed by definition as it can prohibit human expression and therefore creativity. While it can be used to block what is considered to be ‘obscene,’ why should we allow a third party to determine this material for us? I believe an educated and responsible adult should have the choice to digest whatever media they so choose.” Perhaps the key word here is “adult.” Unfortunately, adults aren’t the most frequent users according to this 2021 chart on statista.com: 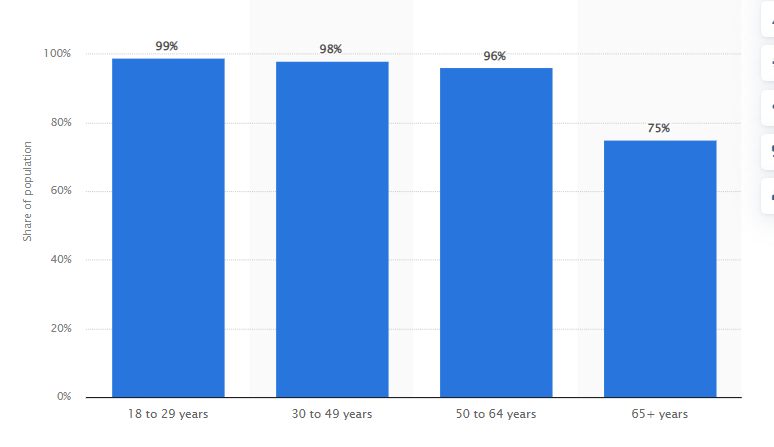 Overall, there is no one answer for censorship. Each instance is different and comes with contrasting benefits and liabilities. This being the case, it might be unfair to keep each platform responsible for things that offend only a certain amount of people. While certain content is inappropriate for some, their accessibility to this content extends farther beyond just these social media apps. Therefore, censorship on topics such as obscenity, violence, and hate speech can be should be removed; whereas, censoring other less significant issues should be left to the discretion of the user.