Human trafficking is a worldwide issue that affects millions of people each and every year. According to the Department of Homeland Security, “Human Trafficking is a form of modern-day slavery, and involves the use of force, fraud, or coercion to exploit human beings for some type of labor or commercial sex purpose.” Many people believe that human trafficking only happens in certain countries, but the truth is that it happens everywhere, even in our own backyard. Senior Paige Reed states, “I feel like everybody thinks that human trafficking doesn’t apply to them, or that they will never have to worry about it, but that’s not true. It can affect anyone at any time.”

Traffickers will abduct people of any age, gender, or race; however, according to the human trafficking hotline, some of the more vulnerable targets are “people of color and LGBTQ+ people because of generational trauma, historic oppression, discrimination, and other societal factors and inequities” that make these people more likely to become victims.  The most common types of professions traffickers adopt in order to come in contact with victims are medical and social workers, law enforcement, and teachers.  Most would consider that these professions are composed of seemingly trust-worthy people. 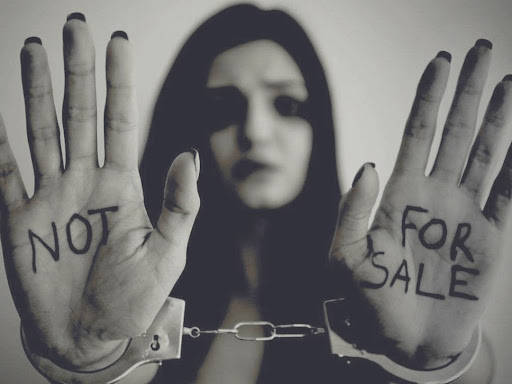 Here are some of the more obvious victim signs: These victims may work very long hours or live and work at the same place. They could display a great deal of anxiety or depression. They often become fearful when law enforcement is mentioned. Victims may show signs of poor hygiene, malnourishment, fatigue, or abuse. Oftentimes they are not allowed to speak for themselves. They could have a rehearsed script to explain signs of abuse. These examples are possible indicators that victims may display. Not all of these signs are present in each and every trafficking situation, and they are not absolute proof that someone is being trafficked.

It is a common misconception that there is no way to stop human trafficking, but that thought is false. In order to help stop these horrid crimes from being committed, raising awareness is one of the best and easiest things a person can do.   Becoming familiar with the signs and teaching others what to look for can save a life.