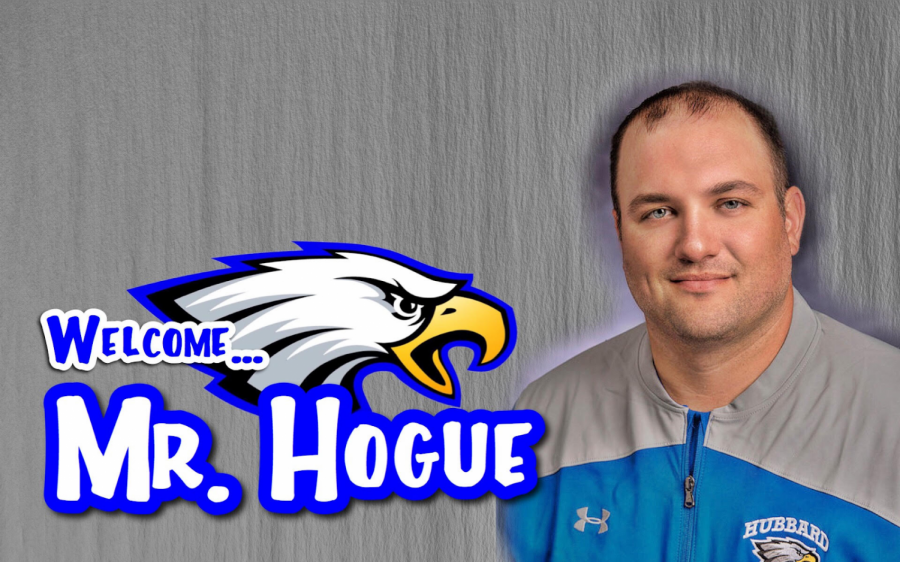 The 2019-20 school year introduces  a new era for the Hubbard Athletic Department after former athletic director, Mr. Chuck Montgomery, retired after a long career here at HHS. Mr. Kevin Hogue, a 2005 graduate of Hubbard High School and the new athletic director of Hubbard Schools, has his eyes set on bringing the program to a brand new level! When asked about his reasoning for coming back to Hubbard, Hogue simply replied, “Why not a local boy?”

Before nesting here with the Eagles, Hogue worked for the Jackson-Milton School District as a Social Studies teacher for nine years, golf and football coach for three years, head baseball coach for 10 years and the Athletic Director for another three years; it goes without saying that Hogue is definitely experienced. When asked about the transition between districts Hogue remarked, “When looking at the size comparison of the two schools–going from a small level of 60 student classes to some of nearly 200 students, you still have to keep in mind that they are both very similar schools, but with a different variety of students.” Moving forward, he hopes to honor student-athletes, not just by athletic achievements, but through focusing on their academic achievements as well.

Growing up, Hogue vividly recalls watching the Hubbard High School football games with his dad, but never expected to end up as an athletic director. Hoping to allow every child to have such cherishable memories, he plans on keeping all sporting events fun and safe for all families. “The goal is to take care of business in the classroom, get a great education, carry good sportsmanship, shake hands, and honor America with our national anthem in order to hopefully transform our students into positive citizen actors,” said Hogue.

Another aspect that he is striving to hit hard on this year is the goal of making a better game day experience for all students. With social media on the rise, Hogue has been staying updated on the Hubbard Athletics Facebook and Twitter pages, giving everyone an opportunity to get involved on game day. Keeping an audience can be challenging at times, but Hogue claims, “It’s all about how you craft your message and staying updated.” He is hoping to find more ways to get the students involved with the school’s athletic programs in the very near future.

Outside of work, Hogue enjoys spending his evenings with his wife preparing for a child on the way. He enjoys attending sporting events including those featuring his favorite teams: the Cleveland Indians, Ohio State, and of course, the Pittsburgh Steelers. He loves to sneak to the golf course every now and then to simply have fun.

Looking forward, Mr. Kevin Hogue, A.D. plans to keep the athletic program fresh and welcoming. He is hoping to give Hubbard opportunities to host state tournaments and even showcases. The horizon of Hubbard Athletics is very bright and hopeful thanks to Hogue’s aspirations. Welcome, Mr. Kevin Hogue!