Sox Succeed in the Series! 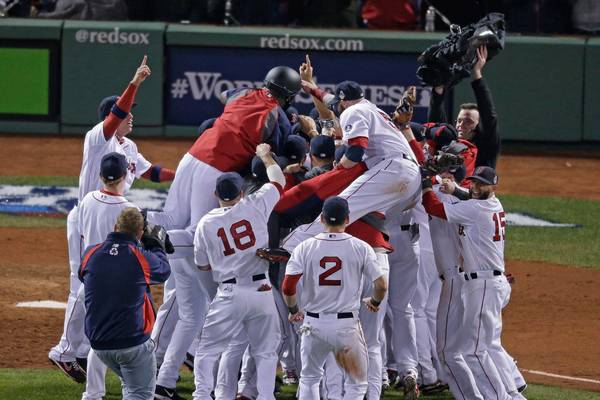 “I think it might be the most special out of all the World Series that I have been part of, to be honest with you,” Boston’s David Ortiz had to say after winning his third World Series Championship. The Boston Red Sox are champions of the baseball world once again! They went on to beat the St. Louis Cardinals in six thrilling games, with each game containing something spectacular. It was certainly a World Series for the ages.

Let’s go back to the year 1918, the last time the Red Sox won the World Series on their home turf. Ninety-five years later, the Red Sox certainly gave their home town fans something to cheer about. The Cardinals put up quite the fight nonetheless, displaying some outstanding young talent. Rookie pitcher Michael Wacha pitched an amazing postseason for the Cardinals. The rookie got the opportunity to start the series deciding game six. Despite a great postseason, the spotlight was a little too much for Wacha as he hit a few bumps early in the final game. The Boston hitters had caught on to Wacha’s pitching style and were smoking almost every ball Wacha delivered to the plate. But one Boston hitter to not get a hit in the final game was David Ortiz. Ortiz, or “Big Papi”, was intentionally walked three times and struck out once. Who could blame the Sox for walking Ortiz? He ended up hitting with a .692 batting average in the World Series.  Big Papi would go on to win the MVP Award of the World Series for an unbelievable performance on the diamond.

After the series, the city of Boston had its championship parade and ceremony celebrating the Boston Red Sox season. An immense crowd numbering two million filled the streets of Boston to be a part of the celebration!  I don’t know your thoughts, but I’d have to say that that’s an unbelievable fan base! Now THAT is what you call “Boston Strong”.  After the Boston Marathon Bombings, and the Boston Bruins losing in the final seconds of the Stanley Cup, this city has earned the “Boston Strong” tag. There’s absolutely no city like it.  Now with players from the Sox like Jacoby Ellsbury, Stephen Drew, Mike Napoli, Jarrod Saltalamacchia, Joel Hanrahan and John McDonald all being free-agents this offseason, it’ll be interesting to see what moves Boston will make and who they will sign or resign.