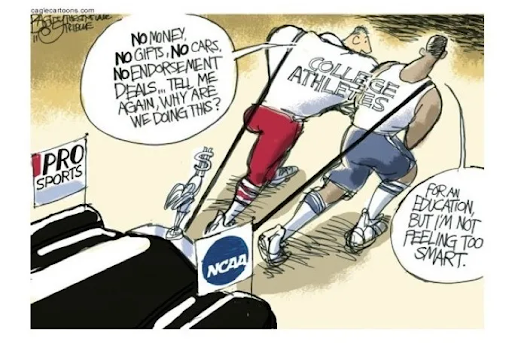 If you plan on becoming a collegiate level athlete, then you could potentially make money from it. A recent rule change, according to the NCAA (National Collegiate Athletic Association), states that “Individuals can engage in NIL activities that are consistent with the law of the state where the school is located.” This means that college athletes cannot be paid similarly to professional athletes with a salary, but can make money on their name, image, and likeness, often referred to as NIL. These athletes are able to sell their own merchandise, make endorsement deals, money from social media, etc. However, is this a step in the right direction for the future of college sports?

The answer is yes, this is a great achievement for college-level athletics. The athletes put in lots of time, effort, and work into their sport, and are putting a lot on the line for their college. They are risking their bodies as well as their education by putting everything they have into a sport, and should be compensated for it. Jake Hoover, a student on the Hubbard Football Team, states “I believe that college athletes should have a reasonable pay if they deserve it.”

College athletes are also a large source of income for a college. Ohio State University, a well known college, made over 59 million dollars in 2019 just from selling football tickets, according to a report from OSU. The only reason this is possible is because of the athletes that play the sport, yet they don’t receive a penny of revenue. Brody Snyder, a student athlete at Hubbard High School, said “College athletes are overworked and a big part of the school’s funding, and should be compensated as such.”

While it may seem positive for an athlete to be paid for his or her hard work, there can be some downsides. One thought is that if college players can be paid, then colleges will persuade high-school athletes to play for them through the offer of a large sum of money. Unfair teams will be created because only the rich colleges will have the best players since they can offer these athletes the most money. However, the current rule claims that colleges cannot offer a student money, but they can only make money based on their NIL. This means that the persuasion of students will be negated, and they cannot be offered money by the college, unless through scholarships.

To conclude, providing college athletes with a way to make income through their work is a step in the right direction for all of college sports. They put in the time, effort, and work as a regular job, but were not being paid for it. A new rule allows them to be paid for their NIL, which gives them a source of income that they deserve. This will not harm college athletics, but will instead improve it.