Hunting Bucks? Why It Helps. 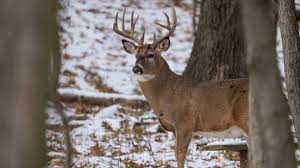 It is 5:30 am on November 29; it’s time to get up. The sun will rise at approximately 7:30 am, but the goal is to be at your particular destination 45 minutes early. This destination? The woods right down the road that back into a corn field. Dressed in your warmest clothes, your gun oiled and ready, your anticipation cannot be described in words. Soon, you will be 20 feet above the ground waiting for the perfect opportunity to take your shot. Why? It is the first day of rifle hunting season when deer activity is at its peak.

According to The Archery Trade Association, Ohio had 390,000 paid license holders in 2018; unfortunately, this number has been dropping by significant amounts each year. According to the Congressional Sportsmen’s Foundation, this decrease in hunters is a serious problem–a decrease in hunters can mean a serious increase in deer. The Association continues to remark that in some areas, deer have caused up to two billion dollars in damage annually due to increasing populations and severe overpopulation in some locations.

Other methods other than hunting in order to control the total deer population were tried. One main plan was to sterilize the deer, a plan that would have worked, but it was a shocking $1200.00 per deer. Cornell University performed this study and spent just over $92,000.00 on 77 deer! After this attempt, it was decided that sterilization was an expensive and fruitless task, especially when hunting doesn’t cost the government anything; in fact, the government actually makes money from it. In 2018 hunting contributed 35 billion dollars from the support of 11.5 million hunters, online sources state.

Without hunting, the only other alternative is to let nature take its course; however, the problem is what will happen before this stage is reached. For years the population would continue to grow out of control until there is no longer enough food to feed all the deer.  At this point, millions of deer will starve to death. That’s not all though; before this stage is reached, the deer population will be plagued by disease and other forms of sickness, causing even more death. Suffering with disease, starvation and sickness is an inhumane way for these animals to die, not to mention the ramifications that this would have on the human population. When Caleb Elliott (Grade 9) was asked if he was opposed to hunting he remarked, “No, it helps with animal overpopulation, and it is a more peaceful way to put an animal out of its misery than letting it starve to death.”

Additionally, hunting creates a great source of protein that is much cheaper than any others. Hunting helps reduce the ever-increasing number of animals that are artificially grown in order to provide food for Americans. When asked “How does hunting affect the world?” Lucas Vargo (Grade 10) answered: “Hunting is beneficial to the world; it has provided us with food to eat for centuries, and has, in the past,  kept game animals from reaching a point of overpopulation.” Therefore, if society were to hunt more, it would not only fix overpopulation, but it would also allow for a decrease in the number of animals that are grown only for food. An additional argument here is the ethical one.  Hunters would argue that killing deer for food is “no worse than killing a cow or a chicken.  Furthermore, unlike the cow or the chicken, the deer lived a free and wild life before being killed and had a chance to escape,” states an online source titled Treehugger.

Another benefit to hunting is that it would help decrease human/deer conflicts “such as car/deer collisions, Lyme disease, and landscaping damage,” comments the same site.  This is an argument that supports hunting not for the purpose of providing hunters with animal head for trophies, but for the purpose of making life safer for both humans and deer.

In the end, no matter how you put it, we need hunters. They provide a quick, humane, ethical and cost efficient way to decrease the overall population of deer while decreasing the amount of livestock needed to feed society and while also preventing other human/deer conflicts.