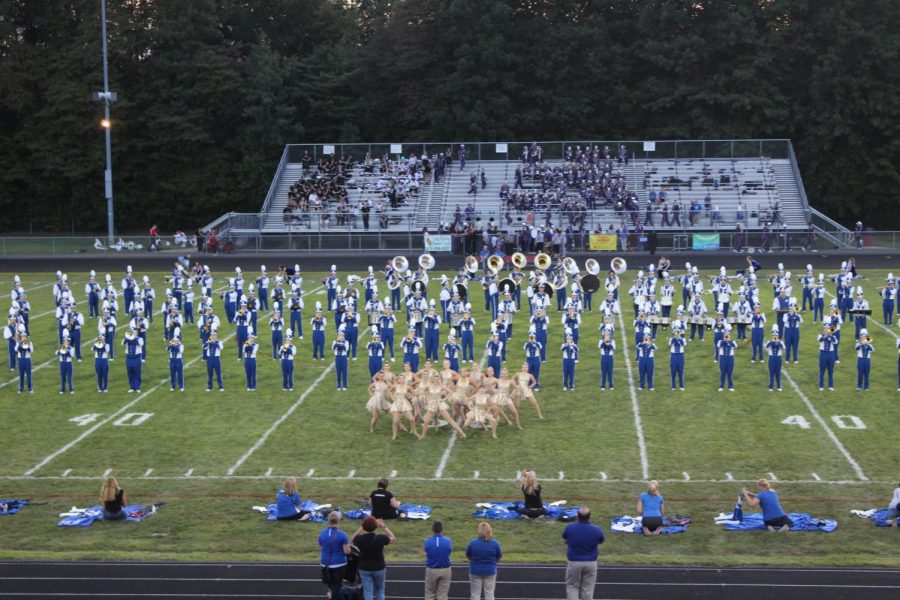 While the football season may have just started, the marching band season has been well underway for the just under 200 member group. The musical pride of Hubbard started their 2018-19 journey with band camp at Thiel College at the end of July. The band spent the week in Greenville, Pennsylvania perfecting their halftime show, with the end product being labeled “Road Trip Karaoke”.

Band president Maya Weser revealed that choosing the band’s showtime routine was not an easy task. “Picking the show wasn’t as easy as one would think. The officers have to get together, find some songs and put some shows together. Then we had the band vote on what they wanted to play because they have to like the songs too in order to play them well. I didn’t want it to just be the officers picking. I’d have to say my favorite song is a tie between ‘Hooked on a Feeling’ and ‘Locked Out of Heaven’,” stated Weser.

The band took their show on the road, with their first stop being LaBrae’s band night, followed by Champion’s and Hubbard’s. “Our first band night started out a little rough, but we pulled through and improved. We rose to the occasion and ended up nailing an excellent performance,” exclaimed Assistant Band Director, Mrs. Andrea Lewis. Band Vice President David Dull joked, “They were like a good wine, at first it wasn’t the best, but as time went on it got richer and richer in flavor.”

On August 24, the band took to the field for their first halftime show of the season. “Friday nights are always exciting for me. I always have a great time with my friends in the band stand. My favorite thing about Friday night is when the football team scores. Everyone is happy and the whole band comes together not only to play the Notre Dame fight song, but as a family. I like how this band works as one unit,” remarked band secretary Lily Sinopoli.

The band “family” came together once again to perform with the 8th grade band members who will join the group next year. The band performed the Notre Dame fight song and the classic “Hang on Sloopy” with the 8th graders before performing the iconic Script Ohio show. The band still has what appears to be a promising performance season ahead of them as they continue their “Road Trip Karaoke”.