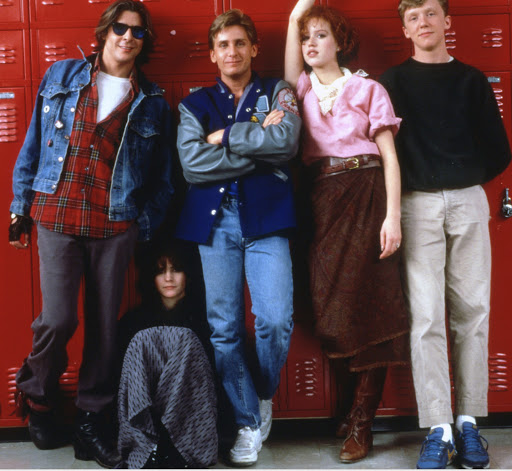 Merriam-Webster’s dictionary online defines a clique as: “a narrow exclusive circle or group of persons, especially one held together by common interests, views, or purposes.”  Online sources list various types of cliques that were made popular via movies or books, such as: “The Socs and the Greasers, the Sharks and the Jets, the Pink Ladies and the T-Birds, the Brat Pack, the Plastics and The Dead Poets’ Society.”

So it seems that high school cliques have been around forever, but the makeup has changed somewhat over the years. In the past, people were defined by stereotypes based on appearance and social class. Nowadays, they are mostly judged on their character. It is more common today that the typical “nerds” play sports, and so-called “jocks” achieve good grades in school. However, there are still cliques in high schools to this day, and Hubbard High School is no exception.

Cliques at HHS include both the boys’ and girls’ soccer teams. The two teams continuously support each other–or they “click” based on similarities.  Senior Sam Biro stated, “When one of our players forgets his shorts for after practice, we know that he can borrow shorts big enough from one of the girls who keep extras for the boys in their locker room.”

Another example of a clique at Hubbard would be the football team. They are such a close group and share many memories together. A senior player said, “We’re always joking around and having a good time. I’ve heard people say we look so tense in the huddle during games, but in reality, we’re smiling and making times enjoyable.” The baseball team, sharing a similar bond to the football team, can be described as another clique that “clicks”. They are all very close, both on and off of the field. The team enjoys many activities together, including joking around with their coaches. Nate Bencetic, senior, and Mikey Zapka, sophomore, stated: “When Coach Jon Jon Shiraldi got his 100th win, we all charged at him with baby powder.” Moments like these are what make these groups of students have such a strong relationship with one-another.

The cheerleaders at HHS “click” as well, and they even consider themselves to be a family. Each older cheerleader is responsible for a younger one whom they guide throughout the year. Sophomore cheerleader Karlie Brenner comments on her experience. She said, “Picking our “Big Sis” and “Little Sis”  definitely brought the JV and Varsity squads closer together.”

At Hubbard High School, the marching band has also always been a clique. This is no surprise, considering all of the time they spend with each other at events such as: band camp, summer and after-noon practices, and Friday night football games. They all share some great experiences. Sophomore Maddie Grey recalls a favorite memory:  “Mr. Nestich said, “Of course, on the weekends, I like to sit down and enjoy a Coca Cola classic, but that doesn’t mean it’s appropriate to bring to band camp,” making fun of the players who spend more time lounging around eating and drinking than they do practicing at band camp.

Still Hubbard High school contains the most common and familiar types of cliques: nerds, preps, jocks and artistic types. But today, many of these groups “click” based on  common activities rather than outside appearances or social class, thankfully. Cliques are often seen as bad and exclusive, but it is now clear to see that that is not always the case. Here many students bond and form close relationships through these groups. Though some may feel that they are being left out, there is surely a clique for everyone, and all can be included within some realm.