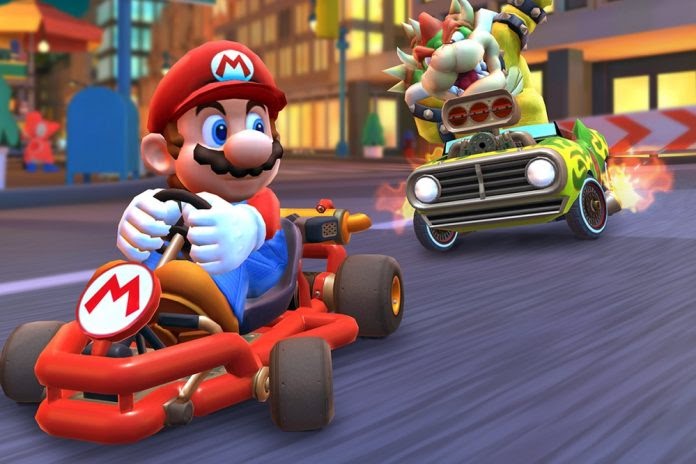 he 2019 Mario Kart Tour game has taken the world by storm. People can now play a new version of their favorite old game on their smartphones! It’s amazingly popular with many high school students and even adults all over the world. Players can play as their favorite characters like: Mario, Yoshi, Princess Peach and others. The game has many different tracks and movement up levels is determined by a racer’s speed.  Old tracks like Rainbow Road and Bowser’s Castle still appear, and there are even some new ones. But just what makes this game so popular?

First of all, according to online sources, the game came out on September 25, 2019, and 90 million people downloaded the game within the first week. “Mario Kart Tour, took home the top spot as Apple’s Most-Downloaded Free iOS match of 2019! The sport beat out other notable Top 10 contenders, including Call of Duty Mobile and Fortnite,” states Topbuzztrends.com.

Most sources cite three primary reasons this game has become so popular so fast:

“First of all, many of the game’s players are already Nintendo fans. These people are, and have been, dedicated to the company’s countless games, franchises and characters, including Mario himself…It’s not only free and fun right off of the bat, but it’s also easily accessible on your phone.”

The game has new race tours that switch up every few weeks. They have a daily prize for logging into the game too. To move up in rank or even play new races, one has to get stars by completing other races. If a player does well, he or she earns five stars, but the farther down the tour list, the harder it gets to obtain these. Players use their phones to twist and turn around on the track, collect power-up boxes and try to get first place. Drifting around the track can be done in a simple, easy, beginner way or the manual way where one swipes left and right to drift, which is a bit more difficult.

Some say this new trend that quickly came about is sadly dying out just as fast in some places. HHS high school Junior, Isabella Sandberg remarks, “The Mario Kart game is a short-lived trend that has seemed to have died already…. It was fun for a while, but it has started to get boring.” Some people were eager to play and try to get to the top of the ranks, but after a while, some have gotten bored, sometimes waiting a whole day to get new maps. Though it might be dying out with some teens and adults, there are still many who enjoy racing around the tracks with their favorite characters.

Hubbard High School junior, Anthony Gagliardi still enjoys playing Mario Kart Tour.  He tends to play daily, or at least tries to. He wishes the game would give a multiplayer option so there could be some more friendly competition in the game. Anthony said, “Y’all are lucky it’s not multiplayer yet because I’m too nice.” Many agree that there should be an option for multiplayers, giving people the option to play with their local friends instead of AI recreations. Even with some of the flaws, Mario Kart has once again raced into our interest, and it’s probably here to stay.

Consider the video below for ways on how to maximize your odds in this game: