Bandemic: Back in Action Again! 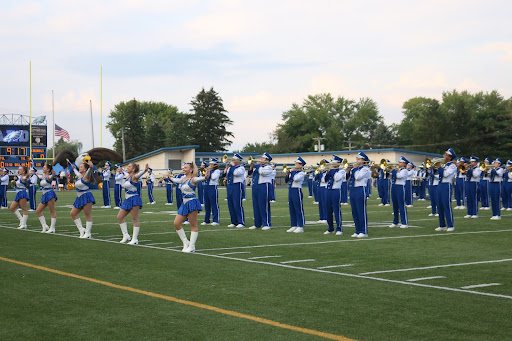 After the world shut down in March of 2020, the band was split into four mini bands as band director Mr. Dan Nestich described them. For the first time in over a year, the band is back together, and this year, the musical pride of Hubbard is ready to impress everyone with their halftime show. With 165 members of the band, this year’s theme is Bandemic.

Band President for the 2021-2022 marching season Robbie Gawdyda described what it was like to be back on the field for the first time all together in over a year. “The 2020-2021 Marching Band season was disappointing, for me, the band, and I think I could say our audience wasn’t too thrilled either. We have a recurring theme in our band that we are a band “family,”  and I think most of the disappointment stems from missing those moments and experiences of participating in that family. That being said, we did what we could given the situation. I definitely felt more enthusiastic and eager to get back into the swing of things when the 2021-2022 band season came around, because we would be back to normal (for the most part). I was not disappointed this year; the amount of effort I saw during band camp and at the summer practices was fantastic, and the band really has excelled. I am very proud of the Marching Band; I’m proud to be in it, and I’m excited to see how much improvement there will be when I return as a Hubbard Alum,” stated Gawdyda.

On August 18th, the Hubbard High school band held their annual Band Night with bands coming from all over the county. Some of the schools involved were Brookfield, Campbell, LaBrae, Champion, and Liberty. As always, the show starts with Run on and Fanfare then goes straight into the first song titled, Pump It. The song featured Hubbard’s Flagline. When asked about performing, flagline senior Grace Basham said, “It’s like an adrenaline rush, it’s so exciting being on the field listening to the band play.” During this song, the band’s drumline creates different shapes while the flagline marches into the middle of the band, then to the front and at the end, they rush to the back. The second song performed by the band was titled, The Kids Are Alright. The band keeps stationary with sides down, so all eyes are drawn to the majorettes. Majorette senior, Emily McNicol, described what she feels before she goes on to perform. “When I’m getting ready to perform I usually just relax so that way I don’t get nervous and have a bad performance. This technique has helped me out throughout my years of dancing,” McNicol said.

The third song performed is titled Ex’s and Oh’s. The band moves multiple times throughout the song. At one point, the band creates an “x” and “o” on the field while the drumline creates a plus sign. The flagline performs alongside the band. The band’s performance continues with the song titled Thanks For The Memories. This song includes the all-famous band dance, which included moves like Micheal Jackson’s famous moonwalk. Hubbard’s majorettes were featured in this song. Blinding Lights is the band’s fifth and final song. This song included Hubbard’s flagline. The band creates many different shapes and patterns during this song. As the night comes to an end, the band sticks to tradition by ending the performance with Flutes and Tubas.

Even though the band has many traditions, Script Ohio Night will always be the one to remember. On this night, the band starts the halftime show with Run On, Fanfare into Notre Dame as they march onto the field. Once in place, the band performs Ohio State’s Hang On, Sloopy! with the 8th graders. Once Hang On, Sloopy! is complete, the 8th graders march forward as the band walks back. After the band gets into place, they then complete Script Ohio. Just like the end of every halftime show or performance, the band performs Flutes and Tubas. The band director Mr. Dan Nestich described what he felt after the band had performed Script Ohio, “There is always a sense of pride and a sigh of relief at the completion of every Script Ohio Show…and this year was no different.”

So far, the band has put on an excellent performance and plan on continuing that with upcoming performances. 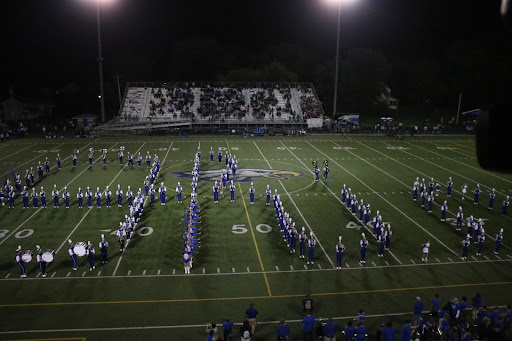