From 2017 to 2018 the amount of high school seniors who have admitted to using e-cigarettes has jumped by almost a third, states online sources.   According to the National Institutes of Health, in 2018, 37.3 percent of these students reported any type of vaping in the past 12 months, compared to 27.8 percent in 2017. The term vaping by definition is the action or practice of inhaling and exhaling the vapor produced by an electronic cigarette or similar device. The original purpose of electronic cigarettes, more commonly known as e-cigs, was intended to help adults quit cigarettes. In the recent years, studies have seen a sharp increase in adolescents using these devices. View the video here to get more information on the increase of vaping:

Some of the devices that are common amongst teens include: vape-pens, hookah, box mods, and JUULS. JUUL has become very popular since 2015. Teens have even developed their own term for it, juuling. Child’s hospital of Wisconsin claims that 20 million JUULS are sold per month, which makes up 45 percent of the total e-cigarette market. JUULS are very discrete devices that are meant to look like USB drives. These devices are advertised to be very appealing towards the younger age groups. They come in many different flavors and are easy to obtain. Each of these cartridges contain 50 mg of nicotine which equals a whole pack of cigarettes! 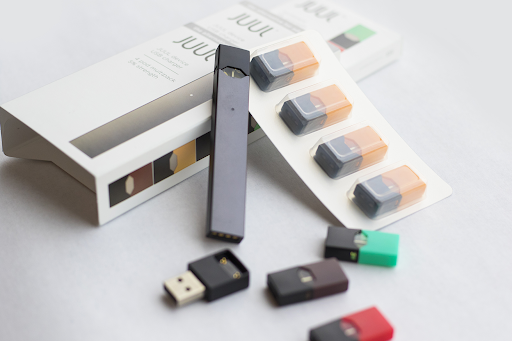 According to Yale neuroscientist Marina Picciotto, PhD, “Adolescents don’t think they will get addicted to nicotine, but when they do want to stop, they find it very difficult.”  Many teens do not understand that nicotine is highly addictive; yes it is possible to buy liquid or pod refills without nicotine, but these tend to be much harder to find. Picciotto further explains that the reason for this is that the adolescent brain is more sensitive to rewards. This reporter asked some students at Hubbard High School if they know of people others who use these devices with nicotine in HHS. Gracie Bencetic, sophomore at HHS, said “Yes, I know many.” Taylor Pegg, senior at HHS, added “A lot of people at our school use JUULS. I see them all the time everywhere.”

The health effects of these devices can be not only short-term, but long-term. Many of the chemicals in these liquids have been linked to lung disease and damage of the lungs. When nicotine is exposed to the adolescent brain, it can cause problems with learning and memory according to the Children’s Hospital of Wisconsin. Nicotine has also been linked to problems such as depression, anxiety, and mood disorders. Some of the other effects that can spring from these devices include: rapid heartbeat, trouble breathing, acid reflux, and insulin resistance. For more information on the dangers of juuling, view this video: https://www.youtube.com/watch?v=oTi3WJojgxk

The surge of vaping devices recently have sparked concern in many professionals because of the fear that they could lead to cigarettes, or cause cancer.  Included in the article from CBS News is a statement on the concern over both vaping and juuling: “The vaping explosion is a big worry, however. Health officials say nicotine is harmful to developing brains. Some researchers also believe vaping will make kids more likely to take up cigarettes, and perhaps later try other drugs.” The surge of teens using these devices that include nicotine could affect their decision making in the future and most importantly, their health.