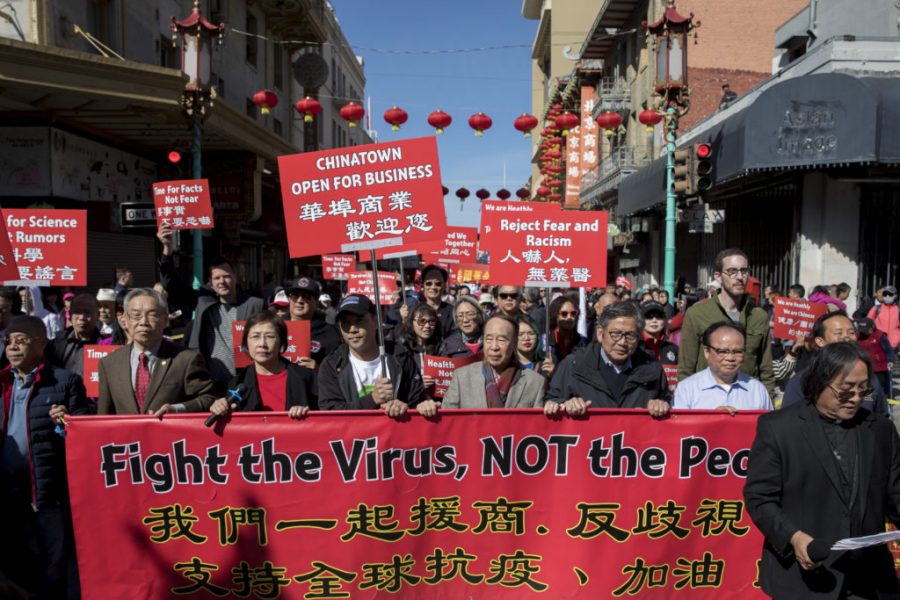 SAN FRANCISCO CA - FEBRUARY 29: Hundreds of Chinatown residents along with local and state officials take to the streets protest against racism against the Chinese community during a march down Grant Avenue from Chinatown's Portsmouth Square to Union Square in San Francisco, Calif. Saturday, February 29, 2020. Racism against the Chinese community has increased since the discovery of the first coronavirus outbreak in Wuhan, China has spread globally. (Jessica Christian/The San Francisco Chronicle via Getty Images)

Ever since the Coronavirus’s origins were traced to Wuhan, China, the world, and especially the U.S, have dramatically increased the disturbing targeting of Asian-Americans, propagating Asian hate. At first, there was a lot of hate speech surrounding the Asian community, but that has horrifically grown into something much worse. According to Stop AAPI Hate, “nearly 3,800 incidents were reported over the course of the year during the pandemic.”  Many people blame the Asian community for the worldwide pandemic, but it is simply no one’s fault, and this increase in hate is a prime example of racism.

On March 16th, 2021 in Atlanta, Georgia, eight people were killed in a shooting at a local spa. Six of the victims were women of Asian descent, and this targeted slaughter led to much fear in the Asian community. Fortunately, the perpetrator has been tried and convicted on eight counts of murder. Although the exact motivation of this shooting is still uncertain, it is widely suspected that a racial bias was at play, and incidents like this have been happening all across the country since the beginning of the pandemic. Senior Whitney Hendrix says of the recent shooting news, “When I first heard about that I was disgusted because I have been hearing about many other similar things since the beginning of the pandemic. I really can’t believe this kind of  stuff is still happening today.” Nevertheless, whatever the motivation was, acts like this are truly unacceptable in today’s day and age.

Since the beginning of the pandemic, people have been using Asian-Americans as a scapegoat in order to put the blame on someone else for how horrible the pandemic has been. Hardly an innocent himself, former president Trump may have helped to propagate this hate by referring to Covid-19 as the “China Virus” or the “Kung Flu.” Senior Mallory Greenamyer commented on Trump’s labeling: “When I first found out Trump said that, I was appalled. I couldn’t believe the President really said that. It got me thinking about how Asian people were going to be affected by this horrible statement.” When one of the most powerful people in the nation declares that an entire race is responsible for a virus, supporters will take that seriously and start blaming a race for the virus. This incident immensely heightened Asian hate in our nation, and probably led to increased racism, specifically against Asian-Americans.

However, anti-Asian-American violence is tragically not a new occurrence.  It has been occurring since people of Asian descent first started immigrating to America. Many older laws and policies were put into place in order to hurt Asian-Americans and their businesses. One of the most destructive of these policies was Japanese Internment camps during World War Ⅱ. Anyone of Japanese descent was directly targeted; many people had their businesses and homes taken from them and were forced to live in camps. Similar to today’s situation, specific groups of people are targeted for something they have no control over, but are being blamed because of their race.

Even though many people act like racism is no longer that big of an issue, it has not disappeared, but has instead only grown more deadly. Due to the pandemic that started in the wet markets of Wuhan, China, Asian-Americans have been disproportionately targeted and blamed for the pandemic. These acts are often perpetuated by politicians and policies that only increase discrimination.  On a personal level, we should each do our part to stop racism and to increase tolerance. One by one, individual efforts can and do add up to change in the world.