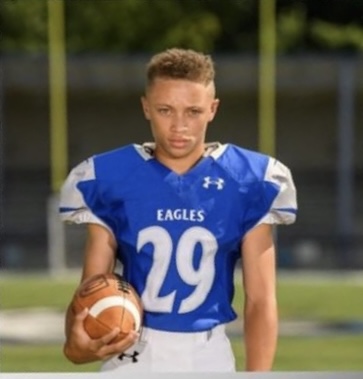 On March 3, 2022, Baron Reynolds, HHS freshman, performed one of the most heroic actions a person can, he saved a life. On this day Baron sprung into action after noticing a fellow classmate choking. He used quick thinking to assess and find the best way to handle this dangerous situation. His determination on what to do was the victim’s salvation.

Baron J. Reynolds III is a Hubbard freshman student who is admired by many for his good natured and upbeat attitude.  Baron is  involved in multiple sports which include track and football. Demonstrating agility and versatility, Baron is also a very good dancer. “Baron is a very kind and funny student and he is always willing to help,” said by Mrs. Irene Pizanias, a science teacher at Hubbard High School

It all began in third period, during Mrs. Irene Pizanias’ physical science class. It was like any other day: students walked into class as the bell rang; they greeted each other and sat down to work on their assignments. Baron was studying with his friends  when suddenly Baron noticed that one of his peers was standing still and had become very, very quiet.  He brushed it off as nothing until his teacher Mrs. Pizanias asked the student if he was okay. Right after her extended concern, the teacher noticed that something was wrong.  The student started to visibly choke and tried to spit up the object that he consumed; this happened repeatedly. The teacher sprinted into action doing as much as she could to try and save him. Mrs. Pizanias started to perform the Heimlich maneuver, but she was not strong enough and could not get a good enough grip on the student.

Once Baron saw that Mrs. Pizanias was not able to dislodge the object from the student, he knew that he could help.  He commented, “I knew that all bets are off and someone had to be successful, so right after  I saw Mrs. P. struggling, I sprang up  out of my seat as fast as my legs could take me. Nobody else seemed to know what to do.” He then went behind the student to start to perform the Heimlich on him as Mrs. Pizanias had, but Baron was able to grasp the student more tightly and deeply, so the food was dislodged. Within a matter of seconds, the student was saved, and all of what he was choking on was out. Medical attention did arrive then, and the student was wheeled off to be attended to. “The only thing that matters is that my friend was okay and that he stopped choking.  I was just glad that he was all right and that I could do something to help one of my very close friends,” said  Baron when  interviewed. Baron thanked Mrs. I. Pizanias for caring so much and doing the most that she could to assist his friend, and he also wanted to thank his fellow friend Malia Hivner for alerting the nurse and the principal who were there instantaneously.

People like Baron help give the world a reminder that there is still good even in a world full of so much division. Let us all try to be like him, serving as a reminder to always help others in times of need.

Below are resources and videos on how to perform the heimlich maneuver if ever faced with a situation similar to this.